A new assessment of need

Government began consulting on changes to the standard method for calculating housing need in England in August 2020. The aim of the consultation was to plan for “more homes in the right places”, continuing the aim set out in the NPPF of making the planning system respond to market signals. However, the response that was published at the end of the year moved away from this. The standard method remains in its current form, but a 35% uplift on the existing need figures will be introduced in the 20 largest urban areas.

The rationale for this measure is threefold; to maximise use of existing infrastructure, to prioritise the use of brownfield land, produce a spatial pattern of development that reduces the need for high carbon travel. While these are laudable goals, the proposal moves away from a truly objective assessment of housing need, and risks allocating a significant proportion of England’s need for new homes every year in cities where there is a lack of suitable and deliverable sites. Consequently, this new method is unlikely to result in the Government achieving its ambition of 300,000 new homes being built each year by the mid-2020s.

The 35% boost to urban housing need figures under the new calculation has resulted in need assessments which are undeliverable and unsustainable in many locations. Standard method 1.1 allocates a total housing need of 124,687 homes across London and 19 other cities across England. The figures are disproportionately weighted towards London, with 85,542 homes (69%) allocated to the capital. This is partly because the uplift applies to every London Borough, whereas in Greater Manchester, for example, it only applies to one of the ten metropolitan boroughs within the combined authority.

Historic housing delivery in the cities has been substantially lower than housing need under standard method 1.1. A total of just 72,077 homes were delivered in 2019/20, 58% of the new housing need figure, with the majority of the shortfall in London.

Looking at the longer term average, these urban areas are even more unsuccessful. Over the last three years the average annual delivery has been 66,649 homes, equal to 53% of the new housing need assessment. Over five years the figure is even lower at 63,882 (51%). The urban areas were planning for lower levels of housebuilding in this period, but have in many cases failed even to reach the existing targets. The gap between delivery and the new assessed housing need figure suggests that it is unlikely they will be able to meet this new challenge in the near future.

However, a handful of urban areas will not come under so much pressure to increase housebuilding. Plymouth, Liverpool, Newcastle, Stoke and Hull each have average annual delivery over the past three years exceeding the new need figures, and are likely to be able to continue meeting their housing need, even with the new uplift.

Where can need be accommodated?

The main obstacle in meeting the revised housing need figures in urban areas will be the availability of land. Some locations such as Reading have tightly drawn administrative boundaries, leaving little possibility for the urban area to expand. The only option available to Reading within its own boundaries therefore is to repurpose commercial land and buildings for housing which is difficult, expensive, slow and in many cases unviable. Stoke faces a similar challenge and, although the council’s Annual Monitoring Report 2019 showed that 98% of delivery was on brownfield sites, there is a finite quantity of these types of sites that will be suitable for housing.

Other locations face policy constraints such as National Parks and Green Belt. The Leeds City Council area contains the City of Leeds and a wider metropolitan area which includes smaller towns and villages such as Wetherby, Garforth and Otley. Within the council area there are large areas of open land which separate the City of Leeds from the settlements that surround it. But almost all of the open land in the metropolitan area is Green Belt (60%) with the remainder built up or urban green spaces. This means that despite there being more than sufficient open land to meet the future development needs of Leeds the council will be constrained by Green Belt.

The 35% uplift to housing numbers in Leeds comes just months after the council lost a judicial review which concluded that it had not lawfully justified removing land from the Green Belt for future development in its Site Allocations Plan. This judicial reviews shows how fraught the issue of Green Belt release is, and the difficulties that the Council will likely face meeting its development needs in the future.

Brighton is in a similar position to Leeds, and is one of the smallest urban areas expected to accommodate a 35% uplift on its Local Housing Need. While not constrained by Green Belt, due to its coastal location Brighton & Hove cannot expand southwards, and the South Downs National Park limits development to the north and the east. There is therefore an acute shortage of available open land to develop.

Across England there are 12 authorities that are neighbouring more than one of the cities highlighted under the new standard method. North Warwickshire, Solihull and Sandwell are examples of areas that would have to accommodate their share of need from multiple sources under this approach.

Even if enough brownfield land can be identified to meet the new housing need assessment, the complexity of this type of site may limit the potential to deliver a mix of housing that meets a range of needs. Manchester delivered 14% more than its assessed need in 2019/20, but 77% of the homes built were flats, with little traditional family housing. In addition, only 10% of the homes built in Manchester in 2019/20 were affordable. Such a low percentage is linked to the fact that circa 95% of residential completions in recent years have been on brownfield sites. Viability issues, including costly remediation of these sites, have severely limited the potential to provide affordable housing.

A similar challenge is present in Brighton, but made worse by the shortage of land suitable for residential development. The most recent Council data shows that in 2018/19 76% of homes delivered were in the form of flats. 78% of homes in that same period were studios, 1 bed or 2 beds. This is a continuation of a general trend also shown in the figures from over the previous two years and is symptomatic of a location where there is a severe shortage of land. As such, the trend for delivery in Brighton & Hove has certainly not been the ‘family homes’ referred to by Robert Jenrick MP when he announced the new Standard Method.

MHCLG indicated that the increased housing figures would need to be met by the urban areas themselves, a direct contradiction of the Planning Practice Guidance (PPG) which encourages a duty to cooperate among neighbouring authorities. But assuming that the PPG remains in its current form,  can housing delivery realistically increase to meet the increased housing need figures by spreading over a wider area?

Of the 131 authorities neighbouring the key cities or within a 40 mile radius of  London, there is already need for 94,000 homes per year, which amounts to 1.0% of existing dwelling stock. If these areas were to accommodate 100% of the average annual overspill from London and the cities over the past three years, housing need would increase across all of these neighbouring and nearby authorities by 62%.

Of all neighbouring authorities, those falling within a 40 mile radius of London would need the greatest increase to their housing need figures to meet overspill from London. The 66 local authorities falling within the radius would each need to increase their housing need figure by 48% if they were to meet just half of the average annual overspill from London over the past three years measured against new need figures.

One of the key issues facing delivery in neighbouring authorities is land availability. The most populous cities across England are typically surrounded by Green Belt in an effort to prevent urban sprawl and encourage the use of brownfield land in development. Many authorities where the majority of land is restricted by Green Belt will already have difficulty meeting their existing housing need figures, before considering city overspill. Of the 131 neighbouring and nearby authorities: 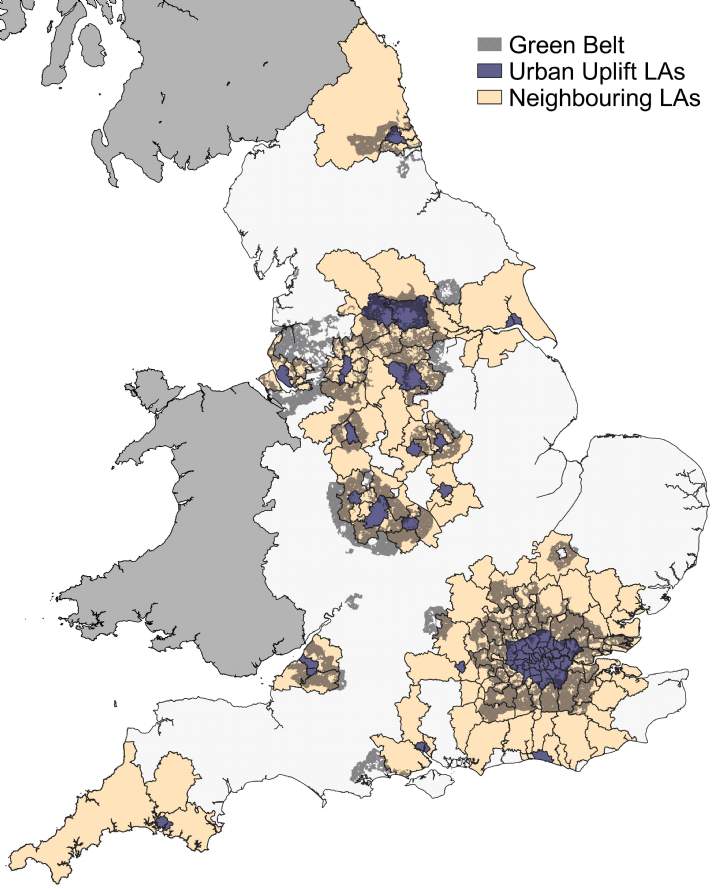 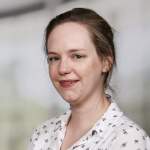