Office rents in the top six cities have risen continuously since 2004 with the exception of 2009, the year following the financial crisis. We believe this rental growth will continue over the coming years, regardless of the consequences
of the Brexit vote, and put forward three arguments in favour of this assertion. Trends in office rents are dependent on three influencing factors: demand for, supply of and development costs of office space.

Consequently, we will look at these three aspects more closely below. In brief, however, all three criteria point towards office rents continuing (and accelerating) their growth over the coming years.

In conclusion, all three aspects discussed point towards a continuation or even acceleration of the rental growth witnessed in recent years in the office sector in the medium term, i.e. the next three to five years. The extent of this growth will vary from one city to another according to local characteristics and changes in conditions. In Frankfurt, for example, owing to the sustained relatively high vacancy rate, comparatively high completion volume and low projected growth in the number of employees, we expect rental growth to be below average compared with other cities. In Berlin, on the other hand, the conditions (low vacancy rate, low completion volume, powerful employee growth) suggest above-average rental growth. Irrespective of this, however, we expect rents in all six cities to show stronger growth over the next three years than their respective averages over the previous three years. 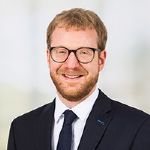