Coastal properties have always attracted a wide spectrum of buyers

The coastline of Great Britain, totalling a distance of 17,820 kilometres, is extremely diverse and is made up of many picturesque towns and villages, vast open beaches, dramatic cliff tops, estuaries, marinas and bays.

Traditionally, the coastline was used as a great source of trade for the country, as marine transport was once the only way to reach the island.

Today, many aspire to buy by the sea for its beautiful scenery, unique lifestyle and plentiful leisure offerings. The type of property available along the coast is just as varied, ranging from fisherman’s cottages to beachfront mansions and modern new-build developments. 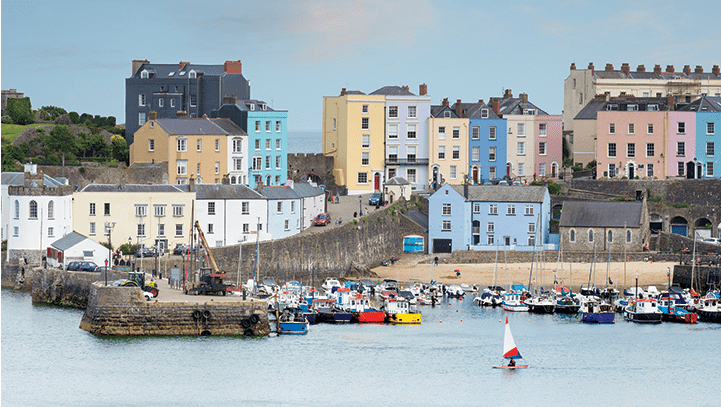 As a result of the diverse range of property types on offer, living by the sea appeals to a wide range of buyers. The vast majority of prime waterfront buyers are domestic, with only 8% coming from overseas. Of those moving from within the UK, 70% are buying their main residence. This means the prime coastal markets have been less impacted by the 3% stamp duty surcharge, introduced in the spring of 2016, than was expected. Even in the South West, which is seen as a hotspot for second home owners on the coast, those buying their main residence make up 65% of the prime markets.

Coastal properties often appeal to empty nesters, who are looking to downsize or relocate after children have left home. Just over half of Savills waterfront buyers in the past two years have been aged over 50, and this figure increases to almost three quarters in the South West. Over half of them are also buying with cash which means the prime coastal markets have been less affected by mortgage constraints in recent years.

Whilst coastal properties will often be sold to local buyers looking to upsize or downsize within these areas, living by the sea also attracts buyers from further afield, particularly those moving from London in search of a complete lifestyle relocation. In the South West, 21% of coastal buyers come from the capital, whilst in the East of England this figure is as much as a third. 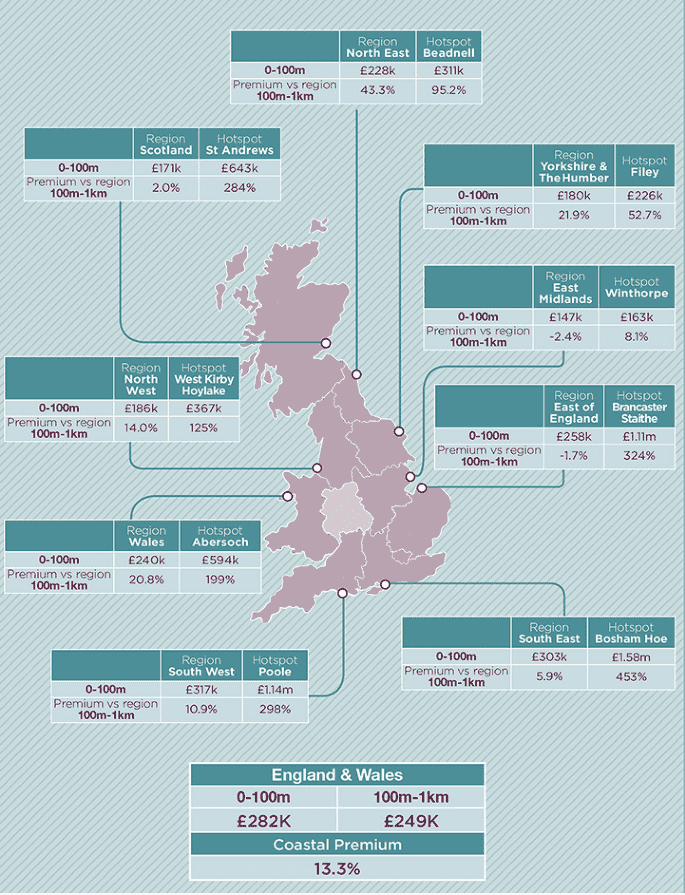 The cost of the coastline

Those buying homes in close proximity to the coast are willing to pay over the odds for the benefits. Second hand property located within 100m of the coastline in England and Wales costs an average of 13% more than that located up to 1km further inland. However, the premium for front line positions with direct views of the water can be considerably more.

The premium in Wales is higher than in England with buyers spending on average 21% more for properties on the coast. This is due to the popularity of locations such as Conwy in the north, as well as the affluent seaside towns of Penarth in The Vale of Glamorgan and Tenby in Pembrokeshire.

The most expensive coastline can be found in South West England where the average second hand sale price of properties within 100m of the sea is £317k, 11% higher than their more inland counterparts. For those looking to buy in the well-established prime markets of Sandbanks and Canford Cliffs, this figure exceeds £1 million.

Cornwall is home to some of the most recognised coastal hotspots in England. Property in Rock, Padstow and St Ives on the water’s edge can often be double the price of that further from the shore. Although on average the Devon coast is lower in value than Dorset and Cornwall, you can expect to pay more on the south coast than the north, due to the popularity of the prime markets of Salcombe, Topsham and Dartmouth.

Despite the high prices achieved on the coastline of the South East of England, averaging just over £300k, the premium for living on the water’s edge is only 6% due to the high values commanded by the inland areas of the region. Coastal hotspots include Itchenor, West Wittering and Bosham in the Chichester Harbour Area of Outstanding Natural Beauty and Brighton and Hove.

In the East of England, property within 100m of the coast costs an average of £258k, but on the whole there is no waterside premium as a result of lower value industrial markets such as Felixstowe and Harwich. However, the North Norfolk Coast and the likes of Aldeburgh, Thurlestone and Orford in Suffolk still command high premiums.

For the North of England, although average prices are lower, the premium for living near the sea is higher. Properties on the coastline of the North East and Yorkshire and The Humber command premiums of 43% and 22%, respectively. This is in part due to the higher value rural villages located on the Northumberland Coast.

The story differs slightly for Scotland due to the remoteness of some coastal locations, particularly those in the North and North West. On average, the coastal premium north of the border is just 2%, however, buyers will often pay considerably more than the home report values. The golfing and sailing hotspots of North Ayrshire and Fife also command significant premiums of up to 40%.